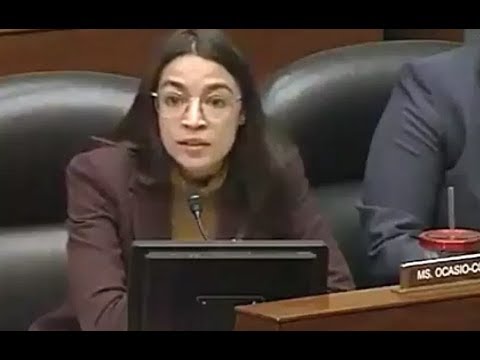 Rep. Alexandria Ocasio-Cortez (D-N.Y.) confronted a CEO Thursday for pricing the anti-HIV drug Truvada, aka, PrEP, at $8 in Australia but over $1,500 in the U.S.

Gilead Sciences Inc. CEO Daniel O’Day has only been on the job since March, and he’s already found himself having to defend his company in front of the House Oversight and Reform committee.

O’Day faced questioning at a Thursday hearing over the high price of Truvada, a medicine approved to treat HIV and prevent infection. Activists claim that the price prevents at-risk people from accessing the drug and has helped keep infection rates high.

Truvada’s annual list price has nearly tripled in the U.S. to more than $20,000 over the past 15 years. It can cost less than $100 per year elsewhere. That’s not an uncommon circumstance. But it feels particularly outrageous given the potential impact on public health, and the fact that government-funded scientists helped develop the medicine – hence the hearing. Gilead is under a particularly bright spotlight for a reason. But the issues raised Thursday over cost and access are rampant throughout the industry.

The timing of the hearing was no accident. News broke in April that the government is reviewing patents on Truvada’s preventative use that could entitle taxpayers to millions in royalties. Shortly after that, Gilead announced that it will donate millions of bottles of medicine for at-risk Americans, a move criticized by activists as too little, too late. That was followed by a lawsuit filed Tuesday that accuses Gilead of a variety of unsavory efforts aimed at keeping the prices of its drugs high.

“I’m praying that you come in and do not give us the normal rope-a-dope stuff we usually hear about the programs you’ve got and the coupons you have,” Maryland Congressman Elijah Cummings told O’Day in his opening statement. “We want the prices to come down.”

That didn’t stop O’Day from pulling out of the standard pharma defense playbook when asked why the company doesn’t just lower its prices. “If we had lowered the prices of our medicines a decade ago, we wouldn’t be sitting here with the innovations that are changing the face of HIV AIDS,” he said.

O’Day also repeatedly touted Gilead’s programs that help lower-income people afford its medicines. And yet, only a fraction of at-risk Americans take Truvada in spite of Gilead’s efforts, according to multiple witnesses at the hearing, and most of them are white men in wealthy parts of the country. Price isn’t the only issue. But it’s a significant one; the use of Truvada is higher and the HIV infection rate is much lower in parts of Australia where there’s a generic available and the price is far lower.

Assistance programs that cover patient out-of-pocket costs are common, but they aren’t selfless. They are often efforts to drive demand for branded products over cheaper alternatives and to keep prices high. The cost doesn’t just vanish because patients don’t bear it – it falls on the rest of the system. As for Gilead’s recent drug donation, anything that boosts access is great. But giveaways and co-pay coupons are distractions from the fact that drugmakers like Gilead refuse to increase access in the simplest and most effective way possible: making the drug affordable.

O’Day isn’t wrong when he says drugmakers need a strong incentive to make risky research gambles. But that’s flimsy justification for industry-wide practices like annual price hikes and elaborate efforts to extend high prices well beyond a drug’s natural patent life, especially when they limit access. And it’s all the more galling considering that Gilead has more cash than it knows what to do with. It has sent $40 billion back to shareholders in the form of dividends and buybacks over the past five years, and has more than $30 billion just sitting around. Its annual adjusted R&D budget is less than $4 billion.

TicToc by Bloomberg is global news for the life you lead. We are a 24/7 news network that covers breaking news, politics, technology, business and entertainment stories from around the globe, supported by a network of Bloomberg’s 2,700 journalists across 120 countries.