Grammys 2020: Brutally honest reviews of all the performances – USA TODAY

Every Grammys ceremony has its performances that will endure as shining moments in the artists’ careers.

And then, there are the duds – the sets the Grammys would just rather let fade into memory.

So which 2020 Grammys performers earned their right to perform at music’s biggest night?

Grande toured practically non-stop last year in support of her Grammy-nominated album of the year “Thank U, Next,” so understandably, she seemed a little tired and occasionally overwhelmed here, with giant set pieces and costume changes. Still, that didn’t stop her from giving it her all during this three-song medley, where she blew the roof off during “Imagine” in a black ball gown, before serving us choreography during hits “7 Rings” and “Thank U, Next.” (That split!) She also seemed to be choked up, and even crying during the latter self-love anthem, so our hats off to her for soldiering through.

After her cheeky, pyrotechnic-heavy “All the Good Girls Go to Hell” at the MTV Video Music Awards, it was nice to see Eilish do what she does best — sing — without all the bells and whistles. Sitting on a stool, and joined by her brother/collaborator Finneas O’Connell, the 18-year-old wunderkind gently and haunting sang her ballad “When the Party’s Over.” It was simple and stripped down, but given that it was sandwiched between bombastic turns from Grande and Aerosmith, it was a welcome change of pace.

Joined by Brandi Carlile on piano, the country legend — who picked up her first-ever Grammys Sunday — sang a poignant version of her song “Bring My Flowers Now,” featuring sadly timely lyrics such as “We all think we’ve got the time until we don’t.” Our only complaint was the performance was so brief, to make time for Tucker and Carlile to present the award for best comedy album (to Dave Chappelle, who wasn’t even in attendance).

As childhood home video played in the background, Cabello serenaded her dad with “First Man,” a ballad off her new album “Romance” calling him “the first man who really loved me.” She ended the song by walking into the audience and holding her father’s hand as he tearfully looked on — the sort of manufactured, treacly awards-show moment that would normally make us roll our eyes. But it’s been a rough week, his tears seemed genuine and her crystalline vocals were on point, so we’ll just say this was sweet. 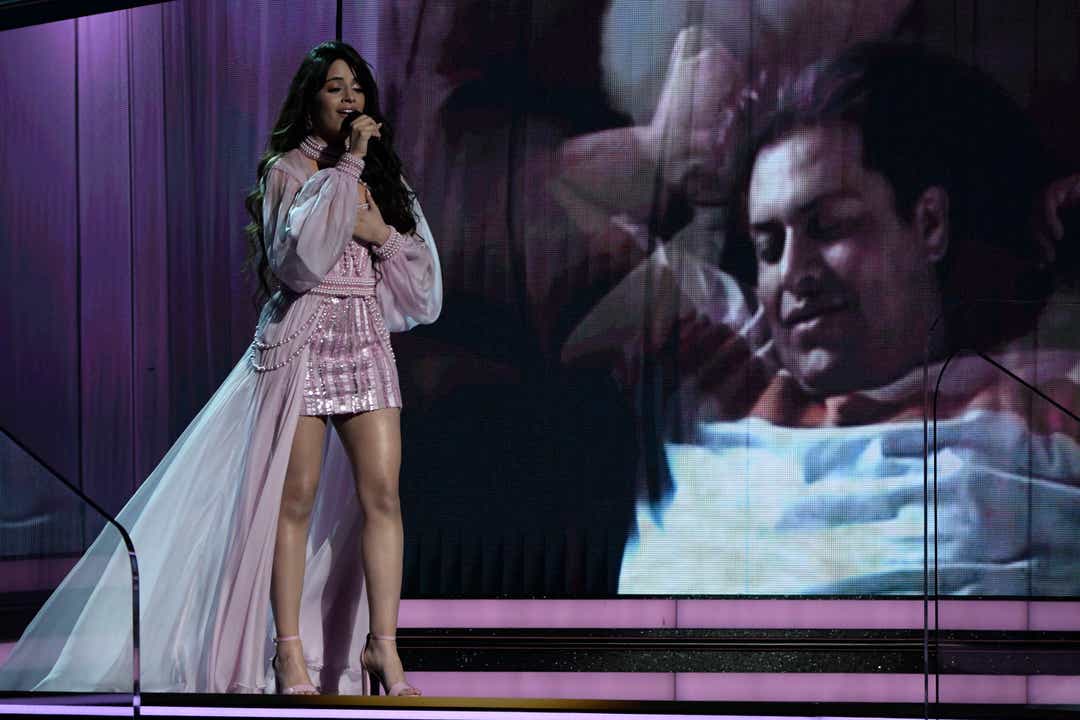 Was Janelle Monae unavailable, or was Usher simply having a rough night? Either way, the singer’s gruff vocals were not the best fit for a splashy Prince tribute, and the R&B star struggled to hit many of the high notes of the androgynous late icon’s catalog. After a dull “Little Red Corvette,” things got mildly better when he shifted his focus to dancing, showing off some truly impressive moves on the groovy “When Doves Cry” and “Kiss.” Major bonus points to FKA Twigs, who stole the show and brought some much-needed heat to the performance with her pole-dancing and hypnotic presence.d

Tyler easily won many new fans Sunday with his explosive Grammys performance, one of the best we’ve ever seen at an awards show — period. After a brief, a cappella take on his hit “Earfquake” with Charlie Wilson and Boyz II Men, the genre-bending rapper launched into a ferocious, fiery rendition of his song “New Magic Wand.” Screaming into a microphone, Tyler jumped wildly around the stage with dancers dressed in short blonde wigs and bright pink suits. Meanwhile, suburban houses burned around them and a crater formed in the middle of a fake street, which he fell into at the end of the performance. Not only was it totally captivating to watch, but the camera shook chaotically right along with Tyler and his coterie, making this a manic fever dream we won’t soon forget.

Grammys 2020: Lizzo pronounces ‘Tonight is for Kobe’ as she kicks off prime-time ceremony

The hit sibling band, who reunited last year, gave a perfectly fine and likeable performance of their toe-tapping new single “What a Man Gotta Do,” joined by tank top-clad backup dancers. It was energetic and Nick Jonas gave us major Elvis Presley vibes, although the only thing we’ll likely still remember Monday morning are their flashy gold-and-black jackets. 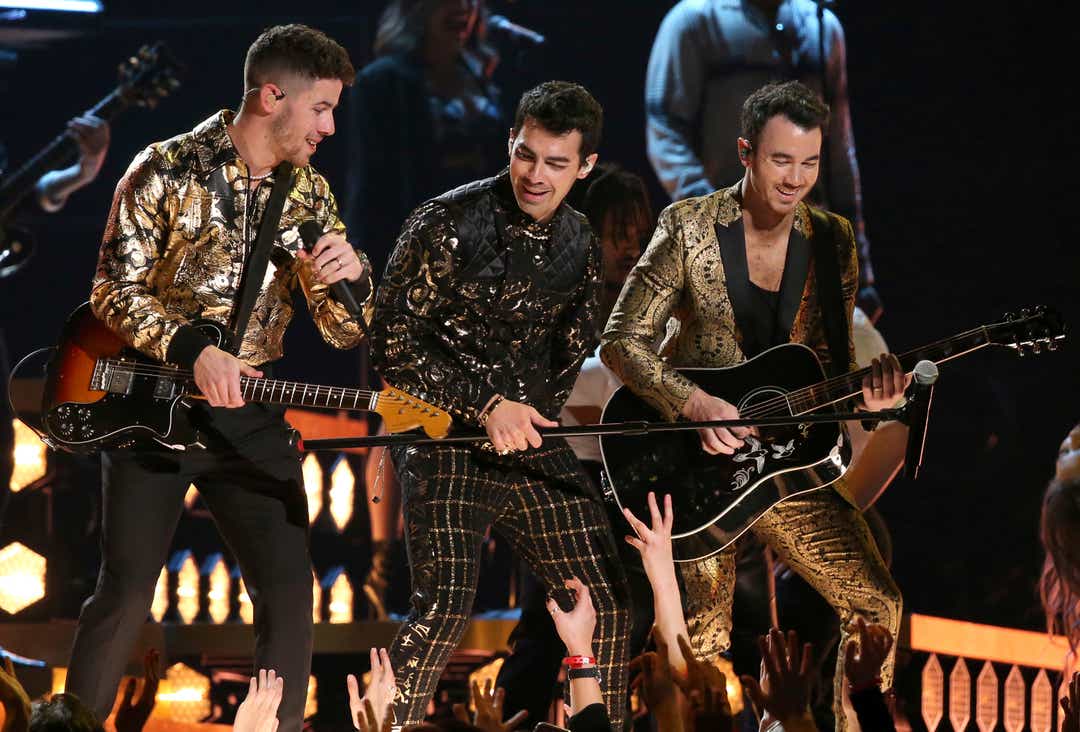 The real-life couple looked and sounded great singing their romantic duet from Shelton’s “Fully Loaded: God’s Country.” But coming after the high-energy theatrics of Lizzo and the raw emotion of Keys and Boyz II Men, there was something a little hollow and forgettable about this performance. They showed some cute chemistry after the song finished — as Shelton smilingly bowed down to Stefani — but we wish there were some more sparks throughout.

The returning Grammys host was faced with the daunting task of keeping the show light and music-focused, while still paying tribute to NBA superstar Kobe Bryant, who tragically died in a helicopter accident with his 13-year-old daughter and seven others late Sunday morning. But Keys struck the perfect tone, performing a short, a cappella version of Boyz II Men’s “It’s So Hard to Say Goodbye to Yesterday” with the R&B trio. It was impossible to not tear up watching the four of them, as they flawlessly sang stirring lyrics such as “I thought we’d get to see forever, but forever’s gone away.” It was a lovely, heartbreaking tribute that both artists deserve major kudos for pulling together last minute.

Lizzo, who led this year’s nominations with eight, got the ceremony off to a dynamic start, showing her powerhouse vocals on “Cuz I Love You,” backed by a sweeping orchestra and wearing a glittering black gown. The charismatic pop-rap breakout then quick-changed into a futuristic bodysuit for a swaggering, playful rendition of her No. 1 hit “Truth Hurts,” accompanied by ballerinas and backup dancers. Lizzo capped off the performance with her signature flute solo, bringing the entire audience to their feet and reminding us that she’s one of the most joyful entertainers in music right now.

Harrison Ford speaks out on his politics: ‘Progress is made in the…

David Beckham and his kids cheer on Victoria during London…

Kim Kardashian and Kanye West Have Date Night at the NBA…