Hundreds of Amazon employees plan to risk their jobs this week by violating company policy – Vox.com 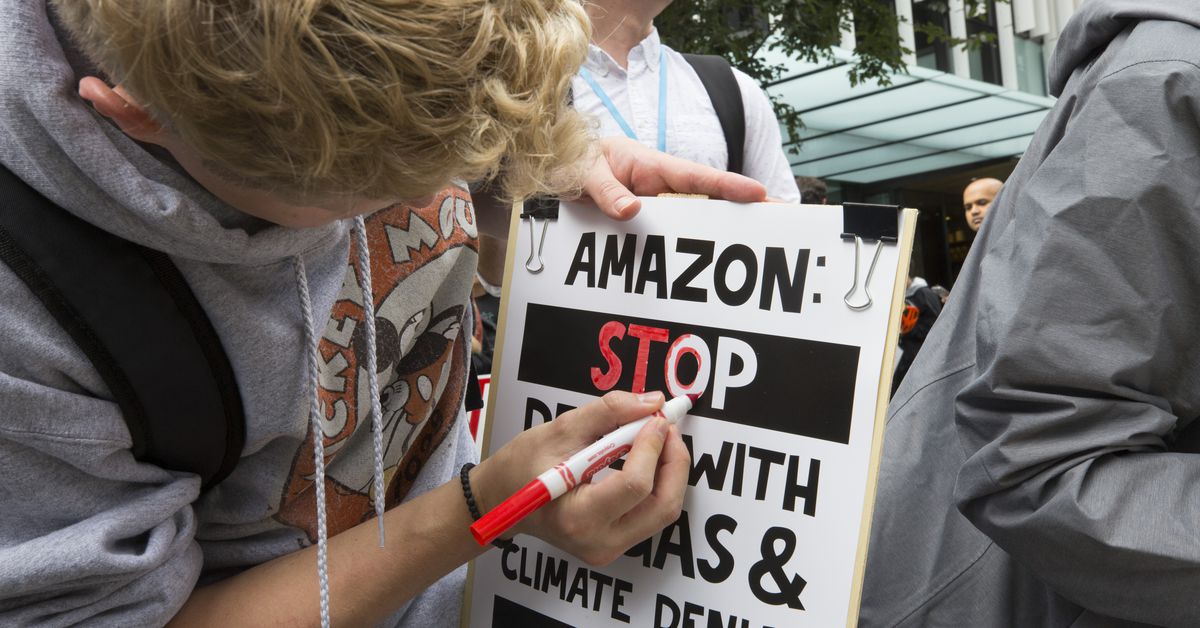 Hundreds of Amazon employees are going to risk losing their jobs in an unprecedented, coordinated effort this week: They plan to openly criticize the e-commerce giant’s business practices, Recode has learned. The move is a direct challenge to Amazon’s recent reported threat to fire climate change activists within the company who allegedly violated a corporate rule that prohibits employees from speaking publicly about the company without prior approval.

“Is it fair to silence Amazon employees who speak up?” says the subject line of an email employee organizers sent to thousands of colleagues on several major company listservs and messaging platforms last week. The note, obtained by Recode, asks employees to either write their own comments or to sign prewritten statements about the company that either condemn or approve of Amazon’s practices, including those related to sustainability, immigration, and warehouse working conditions. Once organizers gather at least 100 such comments, they plan to post them publicly on Medium, according to the email.

Under Amazon’s external communications policy, employees could be punished for publicly speaking about the company without prior authorization. And that’s part of the plan: The organizers believe that if hundreds of employees band together, there will be “strength in numbers,” and the company won’t punish dissenters as easily.

According to reporting by the Washington Post, over 330 employees plan to participate. Organizers did not respond to a request for comment from Recode.

“Let’s all speak up publicly and violate this policy together, making it unenforceable. Quotes about Amazon’s business can be critical or complimentary, because either way violates the policy,” the email says. “Of course, do NOT share confidential information.”

The employees plan to brazenly disobey what they view as a muzzling corporate rule that forces employees to give up “their basic humanity and integrity in order to be employees,” according to the email. It’s the latest sign of rank-and-file employees at tech companies, including Google and Microsoft, organizing collectively for greater influence on major company decisions. And it demonstrates how even Amazon — historically considered hierarchical and heads-down — has become politicized over the increasingly high-stakes social impact of global tech companies’ day-to-day business affairs.

An Amazon spokesperson sent the following comment in response to Recode’s question about if it’s aware of employees’ organizing and how the company plans to respond if employees speak out: “While all employees are welcome to engage constructively with any of the many teams inside Amazon that work on sustainability and other topics, we do enforce our external communications policy, and will not allow employees to publicly disparage or misrepresent the company or the hard work of their colleagues who are developing solutions to these hard problems.”

In the past few years, some Amazon employees have grown increasingly critical of the company’s expansion of its business with major oil and gas companies, its marketing of controversial facial recognition software to police departments, and its bidding on a major US defense contract that would use Amazon’s technology for warfare. For certain employees, business practices like these aren’t what they signed up for when they came to work at the tech company. Their ethical concerns have prompted debates — at first internal but increasingly external — about the projects.

So far, the company hasn’t said much publicly about the growing rank-and-file worker dissent on these issues, which have become an increasing concern for some of Amazon’s employees and those at other major tech companies, such as Google and Microsoft.

Back in 2018, Bezos defended tech companies’ work with the Pentagon, despite waves of backlash from employees. On the topic of sustainability, he’s announced that the company plans to drastically reduce its carbon footprint, and said the company would take a “hard look” at whether its political donations would go to “active climate deniers.” But he said Amazon will continue to work with oil and gas companies — something that many employees take issue with.

A spokesperson for Amazon sent the following statement, in part, in response to a question about workers’ organizing: “We know our employees are passionate about climate change, we are too – we founded the Climate Pledge, committing to net zero carbon by 2040, which is ten years ahead of the Paris Agreement, and we plan to be using 100% renewable energy by 2030.”

Last month, the Washington Post reported that Amazon management privately threatened to fire at least two employees for criticizing the company’s environmental policies in the press. The workers are members of an internal group of Amazon employees, Amazon Employees for Climate Justice, which helped organize participation in a historic global climate strike in September.

Amazon said the employees were violating its recently updated company external communications policy, which requires employees to get company approval before they can speak to the media about the company.

In September, soon after Amazon employees announced their participation in a climate protest, the company told employees that it had updated its company policy on external communications. Previously, employees had to receive approval through email from a company senior vice president if they wanted to speak to the press. Since the change, employees now have to receive approval by making a request through a form on a company intranet page, which requires employees to give a “business justification” for their request.

While Amazon says the policy makes it easier for employees to talk to the press, some say the company is using the policy as a way to silence internal debates — and that in the past, Amazon only selectively enforced this policy. The company has denied these claims; in a statement to Recode last month, Amazon said its warnings to the employees in question were “part of the normal business practice of alerting employees when they may have (knowingly or unknowingly) violated a policy.”

Employees’ new organizing effort this week takes direct aim this policy: “Don’t get us wrong: some comms policies make a ton of sense (i.e.: for confidential projects),” organizers said in an email to employees encouraging them to speak out. “But allowing a corporation to silence us on its contribution to the climate crisis is a clear overreach of comms policy, and effectively demands we give up our basic humanity and integrity in order to be employees.”

The email links to an online form that asks employees to sign their name to prefilled quotes such as: “Amazon should end contracts with oil and gas companies. Our AI and machine learning are being used for ‘finding oil’, ‘producing oil’, and ‘optimizing production’” (source: AWS Oil & Gas public website).”

Another says: “Amazon’s supply chain should not be built at the expense of warehouse workers who work at a pace that causes higher-than-industry-average injury rates. It’s not humane to have people scared to go to the bathroom.”

Not all the statements employees are signing are negative — one lauds Amazon’s decision to order 100,000 electric vans to reduce fossil fuel emissions, as part of its bigger plans to drastically improve its carbon footprint. The announcement, in September, was conspicuously timed a day before hundreds of employees participated in a walkout against climate change, during which they urged the company to be more sustainable. While Amazon said its efforts weren’t connected to the protest, organizers saw it as a win.

It’s unclear if Amazon will choose to punish workers for engaging in this collective action.

In November, Google fired four employees who were involved in workplace organizing around some of the same issues being debated at Amazon, saying that they breached the company’s data privacy policies. (The terminated employees say the company retaliated against them for their activism, and their case is being investigated by the US National Labor Relations Board.) In Amazon’s case, though, it’s much harder to fire a hundred — or more — employees than a handful.

Chinese stocks up more than 1%, rest of Asia mixed as investors assess coronavirus…

Deer makes a quick run to Kroger in Zionsville – IndyStar

Clock’s ticking for Nissan boss Uchida to show he has…

What we know about Facebook’s new oversight board that…

GM to pull out of Australia, New Zealand and Thailand…