What is Fastnacht Day or Fat Tuesday and why are people eating doughnuts? – USA TODAY 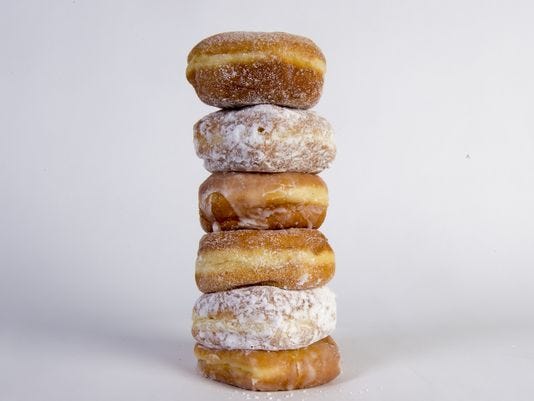 The tradition of making these often doughy delights on what’s also known as Shrove Tuesday began with the need to use up all the sugar, butter, lard and sometimes mashed potatoes in the house before the start of Lent. The result: an often yeast-raised potato pastry that is deep fried like a doughnut.

It’s been said that the name “fastnacht” comes from German words translating to “fast night.”

Whether it’s spelled fastnacht, fasnacht or faschnaut, it’s a treat that many look forward to eating each year.

Here’s what you should know about the fabulously fattening tradition:

What is a fastnacht?

Brought to you by German and Pennsylvania Dutch cultures, a fastnacht is similar to a doughnut, although it tends to feel heavier and taste a little less sweet. Recipes vary. Some include mashed potato and lard. Some are round. Some are square. Some have holes in the middle. They can be plain, glazed, or covered in powdered sugar or cinnamon and sugar.

What does fastnacht mean?

“Fast night,” as in, the final night for many Christians to pig out before the fasting of the Lenten season begins the following day, which is Ash Wednesday.

When is Fastnacht Day … and what is it?

Tuesday, Feb. 25, 2020, is Fastnacht Day, also known as Fat Tuesday, Shrove Tuesday, Mardi Gras and National Pancake Day. They all basically represent the same idea. Traditionally, it was the last day to use up all the sugar, butter and lard before the start of Lent. In many cultures worldwide, it became a day to overindulge. Case in point: In Iceland, they refer to it as “Bursting Day.”

Did you say Shrove Tuesday? What’s that?

The word “shrove” comes from a term meaning “absolve.” Some Christians hope on this day to attain absolution of their sins by repenting and conducting a self-assessment before the start of Lent. But first … hey, let’s scarf down a bunch of doughy treats!

How do you spell fastnacht?

How fattening are they?

Depends on the recipe. Fat grams can range from about 7 to 12 per fastnacht. Some say the calorie count is as low as 200. Others say it’s nearly 500.

Where do I get one?

South central Pennsylvania churches often make and sell their own fresh batches. But some grocery stores, bakeries and doughnut shops also partake in the tradition.

Teresa Boeckel from the York, Pennsylvania, Daily Record contributed to this report.

Coronavirus: Why there have been so few deaths in Hong Kong – Yahoo News UK

China won’t sit and watch Huawei get ‘slaughtered,’ exec says as US…

Arn Anderson On How Vince McMahon Would React To Someone…