Three people in their 20s on a Delta Air Lines flight from Georgia to upstate New York have tested positive for the coronavirus after showing symptoms a day after they landed.

According to the Rensselaer County Health Department, the passengers are residents of the county who traveled on a regional Delta Air Lines flight from Atlanta to Albany on July 6.

All of the passengers, two 22 year olds and one 27-year-old, live in Troy, which is about eight miles from Albany. All three became symptomatic on July 7. It’s unclear the passengers were traveling together.

Health officials said there were 44 passengers on the flight.

‘Any passengers on the flight are advised to call their home county Health Department,’ New York health officials said.

It’s still unclear when or where the passengers became infected with the virus, and how New York plans to track down those individuals and inform them that they were in close proximity with people who became symptomatic just 24 hours after the flight.

A DailyMail.com request for comment to Gov Cuomo’s office about the matter was not immediately returned.

Scroll down for video 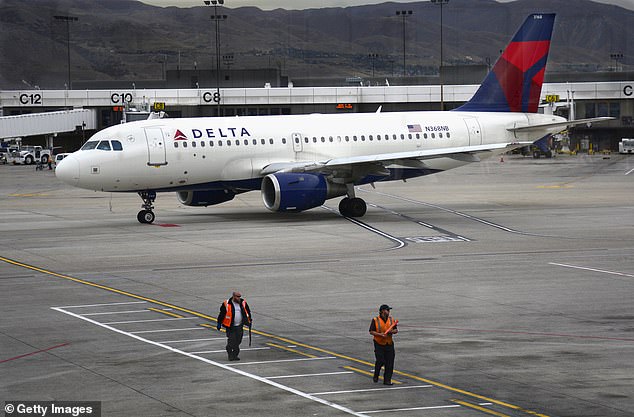 According to the Centers for Disease Control and Prevention (CDC), most viruses and other germs do not spread easily on flights because of how air circulates and is filtered on airplanes.

However, social distancing is difficult on crowded flights, and passengers may have to sit near others, which increases the risk for exposure to the coronavirus.

For that reason, some airlines have blocked off every middle seat, reducing plane capacity.

What’s alarming is that only three airlines – Delta, Hawaiian and Jet Blue – have blocked off their middle seats entirely, despite the rising cases of COVID-19 in states like Texas, Florida, North Carolina and Georgia.

Alaska, Frontier and Southwest airlines have made moves to reduce capacity of their flights, blocking off select seats but not all middle seats.

Since early May, most major US airlines have required passengers to wear masks or face coverings while onboard.

New York, Connecticut and New Jersey have a joint travel advisory that applies to any person arriving from a high-risk state like Florida or Texas.

Travelers from 22 states on the joint travel advisory list are required to fill out quarantine forms before leaving the destination airports.

While New York plans to issue a fine for travelers who fail to complete the form before they leave the state’s airports, it’s unclear how they will be tracking those individuals down.

All three tested positive for the virus after returning home.

But the other two, who are a couple, went grocery shopping and through a restaurant’s drive-thru before testing positive, according to USA Today.

According to the Warren County health department, officials contacted more than 200 passengers who were on the two flights.

Delta Air Lines, which requires passengers to wear masks onboard, has said the airline will continue to block off middle seats and cap seating capacity.

Delta’s chief customer experience officer Bill Lentsch said in a statement that ‘reducing the overall number of customers on every aircraft across the fleet is one of the most important steps we can take to ensure a safe experience for our customers and people’.

Research released on Monday also backed up that statement.

The data shows that barring the middle seat on airplanes may cut the risk of contracting COVID-19 by nearly half.

Using publicly available statistics on social distancing and COVID-19 transmission, Barnett found that a person faces a one in 4,300 chance of being infected with SARS-CoV-2 while flying on a plane with every middle seat filled.

Those odds fall to just one in 7,700 when flying on a plane where no middle seat tickets are booked, according to a report on Barnett’s research in ZDnet.

The travelers arrived in New York just days before Gov Andrew Cuomo made it mandatory for people arriving from a total of 22 states to quarantine upon entering the state.

On Tuesday, Cuomo added four more states to New York’s quarantine list as he seeks to contain the spread of COVID-19 from regions of the country where infection rates are growing.

The addition of Minnesota, New Mexico, Ohio and Wisconsin means that travelers from 22 states will be required to quarantine for 14 days or face a $2,000 fine.

The list of states that meet New York’s travel advisory’s metrics has grown each week as coronavirus cases continue to spike nationwide.

Cuomo has warned that New York’s dropping number of infections could be reversed if out-of-state travelers lead to a rise in infections.

The state’s tally of confirmed COVID-19 deaths in hospitals and nursing homes is nearing 25,000 on top of 4,600 additional presumed deaths in New York City alone. 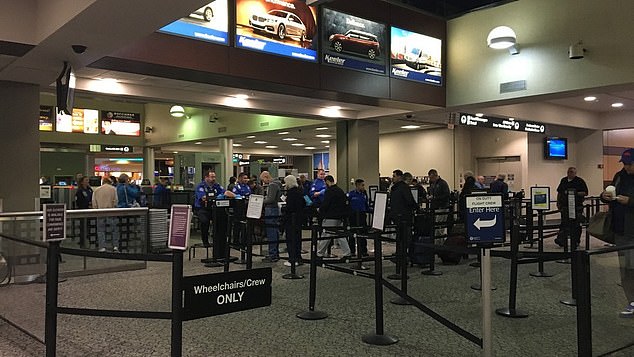 Delta Air Lines, which requires passengers (file image) to wear masks onboard, has said the airline will continue to block off middle seats and cap seating capacity 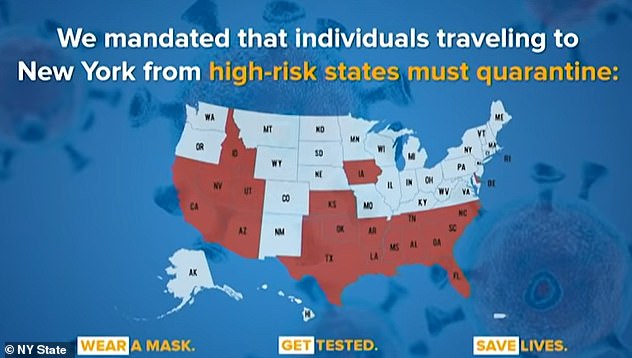 Air travelers from the following states must fill out a quarantine form before leaving any airport in the state of New York:

The state reported just five deaths of COVID-19 patients in hospitals and nursing homes Monday, but the percentage of people testing positive for the coronavirus ticked up to 1.5 per cent from a level of about 1 per cent where it had been since mid-June.

The governor confirmed 912 additional cases of coronavirus, bringing the statewide total to 403,175 confirmed cases in the state of New York.

Cuomo said gatherings over the Fourth of July weekend were to blame for some of the new infections.

‘It’s also clear based on contact tracing that many of the new cases in New York are a result of a lack of compliance during the July 4 weekend and illustrate how quickly the virus spreads, with one party, for example, infecting more than a third of attendees,’ Cuomo said in a news release.

‘I cannot be more clear: Look at what’s happening in the rest of the country – if we are not smart, if we don’t wear masks and socially distance, cases will spike. No one wants to go back to the hell we experienced three months ago, so please stay vigilant.’

Cuomo’s office said that state and local contact tracing efforts found that just over a third of people who attended a Fourth of July weekend party in Suffolk County became infected with COVID-19.

The governor announced Monday that out-of-state travelers arriving in New York airports from the 22 states face a $2,000 fine and a mandatory quarantine order for failing to fill out personal information on a tracing form that New York will use to help make sure individuals are quarantine.

‘It’s all across the country, and it’s undeniable,’ Cuomo said on Monday as he showed reporters a graphic highlighting the 39 states that are seeing an increase in the virus.

He then pointed to states like Arizona, Florida and Texas which have all seen at least an 800 per cent increase in coronavirus cases within the past few weeks.

Cuomo said in addition to the fine, non-compliant travelers may be called to a hearing and ‘ordered to complete mandatory quarantine’.

‘We can’t be in a situation where we have people coming from other states in the country bringing the virus again. It is that simple,’ the governor added.

Cases are only falling on a weekly basis in New York, Tennessee, New Jersey and Delaware.

While southern and western states are seeing the biggest increase in cases, infections are also rising in the Midwest.

Minnesota’s cases have gone up 60 per cent, Missouri is up 40 per cent and Iowa is up 30 per cent.

More than 135,000 Americans have died from coronavirus and there have been more than 3.3 million infections.

One in three Americans say they won’t get coronavirus…

Trump: TikTok Must Be Sold In 90 Days, Cites ‘Credible…