Fastly (FSLY) has been one of the market’s biggest winners since the COVID-19 fueled meltdown. The company exceeded expectations in its most recent earnings report, but the stock sold off. Fear has been stoked by the company revealing that TikTok accounted for 12% of revenue in 1H2020.

Losing a 12% customer is never a good thing, but is not certain as Microsoft (MSFT) and Twitter (TWTR) have emerged as potential suitors despite Bill Gates’ unflattering comments regarding the potential acquisition. Whenever the market’s knee-jerk reaction is to sell news, it often seems like investors selling are missing the forest for the trees. Investing over the long run is not an overly precise endeavor, but the risk of losing a large customer is something for investors to keep in the backs of their minds when qualitatively evaluating margin of safety.

Despite the sell-off, investors who bought early this year have fared well. What has driven the rally since March? The simplified thesis is that Fastly stands to benefit from increased internet use during the pandemic, but this is not precisely why investors should be excited by Fastly over the long term. Increasing internet use is far too simplistic, we must rather understand who Fastly’s customers are, why they use their services, how much they pay, and why they will continue to use their services in greater quantity in the future. 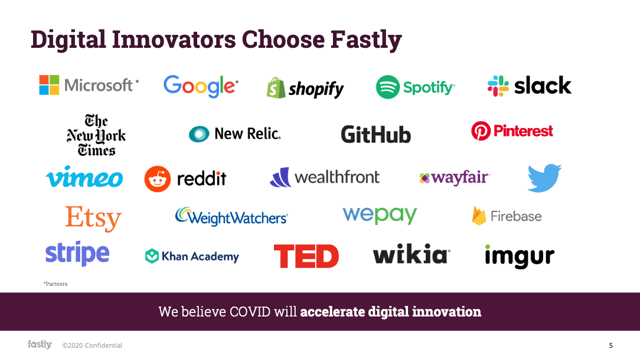 Fastly’s customer base is the who’s who of digital innovators. Understanding how one of these businesses uses Fastly’s services can give investors a clear picture of where Fastly’s growth is coming from.

Take Shopify (SHOP) for instance. Shopify’s business provides digital solutions for businesses. Setting up an e-commerce storefront is one of these services, but Shopify also provides backend services necessary to keep digital storefronts operating at peak performance. Fastly is one of these services. When customers are ordering from a Shopify store, traffic is routed through a Fastly CDN. Thus, as more merchants join the Shopify ecosystem, more traffic is routed through Fastly.

As Shopify grows its traffic, Fastly’s top-line grows with it. This is just one example, as seen above this takes place with numerous other customers as well. Some customers may use more than one CDN, but generally speaking as other businesses like Wayfair (W) drive more traffic, Fastly benefits. While it is correct to assume increased internet use will benefit Fastly, this statement does not capture the essence of Fastly’s structural tailwind. Fastly is a variable expense item for high growth internet companies.

What does this tell investors? Generally, as Fastly’s high growth internet companies grow, it will too.

Content Delivery Networks (CDNs) are nothing new. They are a bridge between the host server and the end user in order to improve performance. Akamai (AKAM), Cloudflare (NET), and Limelight (LLNW). In fact, Shopify is also listed as a customer of Cloudflare. Reddit appears to be the only other crossover between each business’s featured customers. Some may argue that CDN is a relatively commoditized industry. While the service is commoditized, the way by which the service is deployed is differentiated amongst vendors. What makes Fastly different can be traced directly to the founding of the business.

As the story goes, (Fastly founder) Artur (Bergman) became frustrated with the capabilities of CDNs around 2010. He complained about needing technical support to make any adjustments to his CDN configuration and long delays while changes rolled out. Existing solutions lacked programmability, a trait highly valued by the engineering teams who were increasingly getting pulled into discussions about application performance and uptime through the DevOps movement. With a strong hands-on technical background, Artur decided that he could build a better solution and did so.

The core issue of other CDNs lacking configurability is one of the advantages Fastly has when winning the business of high growth internet companies. The other is the coding language Varnish in which Fastly was written.

At the core of Fastly is Varnish, an open source web accelerator that’s designed for high-performance content delivery. Varnish is the key to being able to accelerate dynamic content, APIs, and logic at the edge…

Fastly believes in the power of Varnish – our (author note: now former) CEO Artur Bergman and engineer Rogier Mulhuijzen have contributed to parts of the base code, and continue to contribute to the project to this day. Rogier tells a great story about the first time he ever wrote VCL, which will also give you an idea of what Varnish is capable of.

Fastly’s speed enables outlets to push information faster than ever before. Seeking Alpha or CNBC can run breaking news headlines at the edge (your device), enabling readers to receive breaking news headlines in real time. For businesses that aren’t technology driven, it isn’t really necessary to complicate things with a configurable CDN.

Ultimately, Fastly offers a differentiated CDN for developers, but the functionality of the core service has ample competition. This user describing the desirability of Fastly and Cloudflare can give investors some insight into the differences.

over-bifurcating to make a point: cloudflare is for macbook devs, fastly is for linux workstation types.

they can both do about 80% the same stuff pretty easily, but cloudflare favors its web interface and “dumbed down” settings to keep the barrier to entry and learning curve low.

fastly has a nearly vertical learning curve (dns, tls, vcl, shielding, io/waf) but once you’re comfortable with it you can almost think of it as part of your stack, like one of your services that just happens to be the one that talks to the world.

i would key the decision off what you’re trying to do. if you want to “set it and forget it” by clicking around in the webui once and then not touching it again till maybe you change hosting, and are fine with 80 – 90% cache hit ratios, you’re probably gonna have an easier time with cloudflare. if you want to use regex and change headers and mess with cookies and use active cache invalidation to get 99% cache hit ratios, use fastly.

Arguing that Fastly’s services are pure commodity isn’t quite fair, but is understandable. Users describe Fastly’s services as generally being more technical, but that level of technicality is not necessary for every business. When comparing customers and reading the opinions of those who understand both services, it seems Fastly has a greater potential in terms of taking overall customer volume. This implies investors can model rapid growth continuing in the foreseeable future.

Revenue is critical, but free cash flow matters to investors. To better understand Fastly’s prospects, we also need to better understand the interest surrounding its edge computing platform, and have a closer look at cost structure.

Edge computing receives a lot of buzz, but this simple example from Cloudflare gives us a good idea of how edge computing is practically used:

Consider a building secured with dozens of high-definition IoT video cameras. These are ‘dumb’ cameras that simply output a raw video signal and continuously stream that signal to a cloud server. On the cloud server, the video output from all the cameras is put through a motion-detection application to ensure that only clips featuring activity are saved to the server’s database. This means there is a constant and significant strain on the building’s Internet infrastructure, as significant bandwidth gets consumed by the high volume of video footage being transferred. Additionally, there is very heavy load on the cloud server that has to process the video footage from all the cameras simultaneously.

Now imagine that the motion sensor computation is moved to the network edge. What if each camera used its own internal computer to run the motion-detecting application and then sent footage to the cloud server as needed? This would result in a significant reduction in bandwidth use, because much of the camera footage will never have to travel to the cloud server. Additionally, the cloud server would now only be responsible for storing the important footage, meaning that the server could communicate with a higher number of cameras without getting overloaded. This is what edge computing looks like.

Edge computing’s advantage is reducing strain on the digital infrastructure. This is a net positive for end users because compute power costs money. But, this leads to a monetization problem for Fastly.

Consider the above scenario in terms of Fastly’s business. Fastly generates revenue based on the volume of outputs, edge computing is set to dramatically decrease outputs.

Our usage-based revenue grows as our customers’ websites and applications deliver, process, and protect more traffic, as they adopt more features of our edge platform and as they more broadly adopt our platform across their organizations.

Edge computing and Internet of Things devices are still in the very early innings. While it gives Fastly more upside if the business is a winner in this segment, it’s incredibly difficult to forecast. Investors should not assign any tangible value to Fastly’s edge computing platform at the current moment. Edge computing may provide a platform for businesses to reduce expenses, but Fastly must thoughtfully navigate the monetization problem.

Why Investors Must Tread Cautiously

So far, we have covered why we should expect Fastly to continue to grow, and why we should be cautious assigning any value to its edge computing platform.

We need to know what free cash flow will look like. Unfortunately, Fastly does not enjoy the same operating leverage as many of its customers. This is because of Fastly’s physical points of presence (POPs). 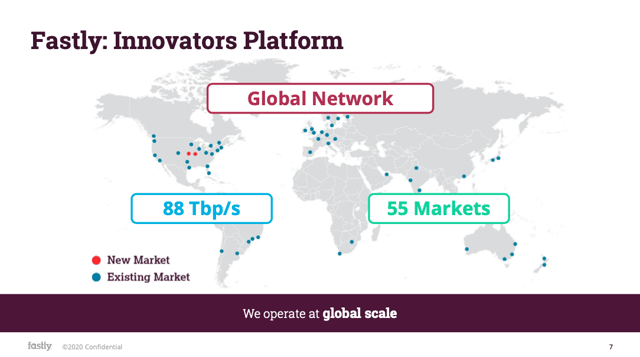 Fastly requires physical assets in order to run its business, which will naturally pressure margins compared to other technology businesses. A software company, for example, will need very little additional expenditure to service an additional customer creating high operating leverage, Fastly won’t quite have the same advantage. This shows up in Fastly’s gross margin. In any case, what ultimately matters is what the market expects from Fastly. A simple 5-year look at free cash flow can give us an idea.

I used consensus number for revenue through 2022, and maintained a 35% growth rate over the next three years. As much as this article has discussed, this is due to Fastly’s structural tailwinds. But, having a look at margins, we see, even after the sell-off, the market is expecting a lot. This makes it dangerous buying at the current level.

FCF margin going from -22.9% to +15% in 2025 is no small task for a business to accomplish. Operating expenses should scale, but CapEx likely won’t considering Fastly’s physical POPs. A multiple of 50x FCF is a ballpark estimate considering Akamai is the only CDN at scale and trades closer to 30x with much slower growth. Akamai’s FCF margin is 21%, which might be the best estimate at which Fastly’s margins will look like at scale, but is within range of what has been modeled. This model results in implied marginal return of 0.4% over the next 5 years.

With such an uncertain margin profile, investors are taking a large risk buying Fastly at the current level. Fastly’s capital intensity won’t be a clear apples to apples comparison to a basket of other businesses. It’s difficult imagining a significantly more profitable business than imagined above. Warren Buffett may refer to this scenario as buying a good business at a wonderful price. With much uncertainty surrounding levels of profitability, the risk to reward profile is skewed to the downside.

Disclosure: I/we have no positions in any stocks mentioned, and no plans to initiate any positions within the next 72 hours. I wrote this article myself, and it expresses my own opinions. I am not receiving compensation for it (other than from Seeking Alpha). I have no business relationship with any company whose stock is mentioned in this article.